SpyNote Cracked allows you to easily track your friends on your mobile phone and also can do many things with the mobile phone. This software designs to track your client, but you can also use this app to track your mobile GF. SpyNote Cracked is written in JAVA. Moreover, This is a Trojan horse generator with very interesting features. It was very popular on the deep web at first, but after a while, it exits the deep web and reaches the real world.  Furthermore, SpyNote is known as a remote management tool that allows you to manage any Android. You can access the Android phone you want to access within seconds. This software is available in 2 versions or for a fee.

Free download Spynote for Windows 10 does not have the ability to control the entire cell phone, but the paid version has the ability to easily control the entire cell phone. The software also has a unique interface that allows you to easily control all mobile devices. This paid version of SpyNote Crack is available in cash, which means you have to pay to use the paid version. We need to follow our usage habits.

Symantec first discovered this in early 2014 and appeared underground for $ 300. Dendroid used some features at the time, such as the ability to hide from emulators. When it was first discovered in 2014, it was one of the most advanced Android remote management tools known at the time.

Most importantly, Encrypt and hide from all security apps, encrypt user data between you and your victims, and easily mix it with another app. Packets are sent encrypts between server and client using sophisticated encryption methods.

SpyNote Latest Version was one of the first Trojans to escape the shutdown of Google, and has warned scientists that it will facilitate the creation of Android malware. . Apparently this included the presence of simple commands and control panels in the footsteps of Zeus and SpyEye.

The code seemed to have leaked somewhere around 2014. It was found that an APK link was added to the leak, which provides an easy way to link Dendroid to legitimate apps. SpyNote Key is a free Java-based RAT (Remote Management Tool / Access Trojan Discovery) program. Its server is written in Java and the client controller is written in Visual Basic. NET.

SpyNote Download is an advance remote management tool targets at Android systems. Its server writes in Java and the client controller writes with Visual Basic. NET. After installing Android on your device, Spy Note automatically removes this screen from the victim’s device.

SpyNote has added a wide range of backdoor features including the ability to view all messages on the device without prompting you. The latest version will also allow you to spy on phone calls and activate the phone’s camera and microphone remotely to track the GPS location of the phone.

This APK also contains a remote access tool, also known as a RAT SpyNote website. This program is very similar to other remote management tools like Omni Rat and DroidJack. Of course, you will find many other tricks to gain access to another device, but this will also damage your device. 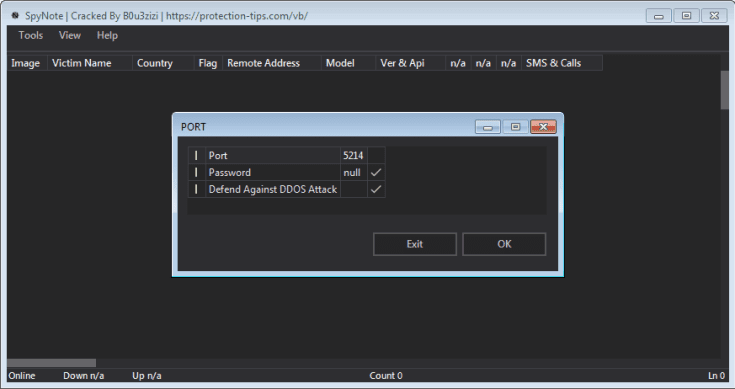